SLF Reaches out to LGBTI Youth

SLF Reaches out to LGBTI Youth 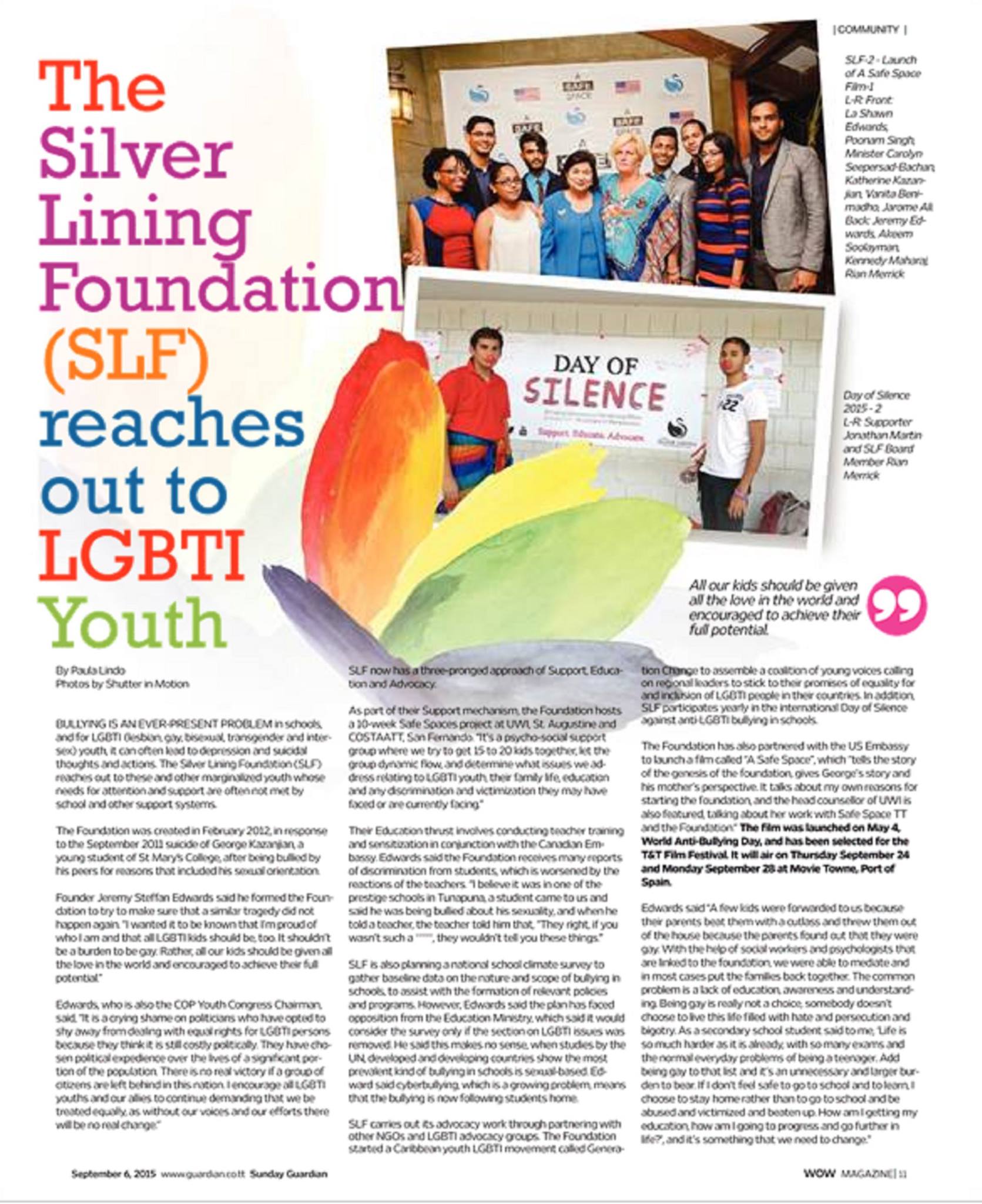 “Bullying is an ever-present problem in schools, and for LGBTI (lesbian, gay, bisexual, transgender and intersex) youth, it can often lead to depression and suicidal thoughts and actions. The Silver Lining Foundation (SLF) reaches out to these and other marginalized youth whose needs for attention and support are often not met by school and other support systems.

The Foundation was founded in February 2012 in response to the September 2011 suicide of George Kazanjian, a young student of St Mary’s College after being bullied by his peers for reasons which included his sexual orientation.

Founder Jeremy Steffan Edwards said he formed the Foundation to try to make sure that a similar tragedy did not happen again, “I wanted it to be known that I’m proud of who I am and that all LGBTI kids should be too. It shouldn’t be a burden to be gay. Rather all our kids should be given all the love in the world and encouraged to achieve their full potential.”

Edwards, who is also the COP Youth Congress Chairman, said “It is a crying shame on politicians who have opted to shy away from dealing with equal rights for LGBTI persons because they think it is still costly politically. They have chosen political expedience over the lives of a significant portion of the population. There is no real victory if a group of citizens are left behind in this nation. I encourage all LGBTI youths and our allies to continue demanding that we be treated equally, as without our voices and our efforts there will be no real change.”

SLF now has a three-pronged approach of Support, Education and Advocacy.

As part of their Support mechanism, the Foundation hosts a 10-week Safe Spaces project at UWI, St. Augustine and COSTAATT, San Fernando. “It’s a psycho-social support group where we try to get 15 to 20 kids together, let the group dynamic flow and determine what issues we address relating to LGBTI youth, their family life, education and any discrimination and victimization they may have faced or are currently facing.”

Their Education thrust involves conducting teacher training and sensitization in conjunction with the Canadian Embassy. Edwards said the Foundation receives many reports of discrimination from students which are worsened by the reactions of the teachers, “I believe it was in one of the prestige schools in Tunapuna, a student came to us and said he was being bullied about his sexuality and when he told a teacher, the teacher told him that “they right, if you wasn’t such a bullah, they wouldn’t tell you these things.”

SLF is also planning a national school climate survey to gather baseline data on the nature and scope of bullying in schools, to assist with the formation of relevant policies and programs. However, Edwards said the plan has faced opposition from the Education Ministry, which said it would consider the survey only if the section on LGBTI issues was removed. He said this makes no sense, when studies by the UN, developed and developing countries show the most prevalent kind of bullying in schools is sexual-based. Edward said cyberbullying, which is a growing problem, means that the bullying is now following students home.

Edwards said SLF carries out its advocacy work through partnering with other NGOs and LGBTI advocacy groups. The Foundation started a Caribbean youth LGBTI movement called Generation Change to assemble a coalition of young voices calling on regional leaders to stick to their promises of equality for and inclusion of LGBTI people in their countries. In addition, SLF participates in the international Day of Silence yearly against anti-LGBTI bullying in schools.

The Foundation has also partnered with the US Embassy to launch a film called “A Safe Space” which “tells the story of the genesis of the foundation, gives George’s story and his mother’s perspective. It talks about my own reasons for starting the foundation and the head counselor of UWI is also featured talking about her work with Safe Space TT and the Foundation.” The film was launched on May 4, World Anti-Bullying Day, and has been selected for the T&T Film Festival. It will air on Thursday September 24 and Monday September 28 at Movie Towne, Port of Spain.

Edwards said “A few kids were forwarded to us because their parents beat them with a cutlass and threw them out of the house because the parents found out that they were gay. With the help of social workers and psychologists that are linked to the foundation, we were able to mediate and in most cases put the families back together. The common problem is a lack of education, awareness and understanding. Being gay is really not a choice, somebody doesn’t choose to live this life filled with hate and persecution and bigotry. As a secondary school student said to me, “life is so much harder as it is already, with so many exams and the normal everyday problems of being a teenager. Add being gay to that list and it’s an unnecessary and larger burden to bear. If I don’t feel safe to go to school and to learn, I choose to stay home rather than to go to school and be abused and victimized and beaten up. How am I getting my education, how am I going to progress and go further in life?” and it’s something that we need to change.”